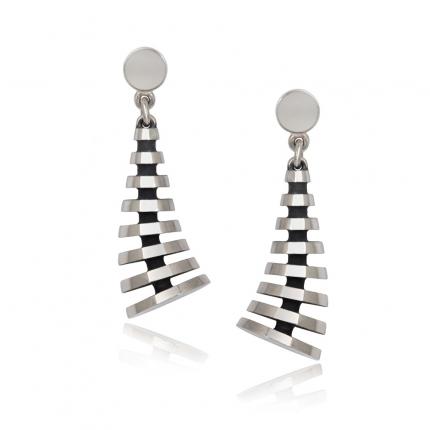 Pyramid Earrings with a kick to the side, eye catching and elegant design in sterling silver with oxidised recesses – 33mm drop including stud

Fine silver, for example 99.9% pure silver, is relatively soft, so silver is usually alloyed with copper to increase its hardness and strength. Sterling silver is prone to tarnishing,[1][2] and elements other than copper can be used in alloys to reduce tarnishing, as well as casting porosity and firescale. Such elements include germanium, zinc, platinum, silicon, and boron. Recent examples of alloys using these metals include argentium, sterlium, sterilite and silvadium.[3] Taken from Wikipedia

The American revolutionary Paul Revere was regarded as one of the best silversmiths from this “Golden Age of American Silver.” Following the Revolutionary War, Revere acquired and made use of a silver rolling mill from England.[18] Not only did the rolling mill increase his rate of production[19]—hammering and flattening silver took most of a silversmith’s time—he was able to roll and sell silver of appropriate, uniform thickness to other silversmiths.[20] He retired a wealthy artisan, his success partly due to this strategic investment. Although he is celebrated for his beautiful hollowware, Revere made his fortune primarily on low-end goods produced by the mill, such as flatware.[21] With the onset of the first Industrial Revolution, silversmithing declined as an artistic occupation.

From about 1840 to 1940 in the United States and Europe, sterling silver cutlery (US: ‘flatware’) became de rigueur when setting a proper table. There was a marked increase in the number of silver companies that emerged during that period. The height of the silver craze was during the 50-year period from 1870 to 1920. Flatware lines during this period sometimes included up to 100 different types of pieces.

A number of factors converged to make sterling fall out of favor around the time of World War II.[citation needed] The cost of labor rose (sterling pieces were all still mostly handmade, with only the basics being done by machine). Only the wealthy could afford the large number of servants required for fancy dining with ten courses. And changes in aesthetics resulted in people desiring simpler dinnerware that was easier to clean. Taken from Wikipedia

The Egyptian pyramids are ancient pyramid-shaped masonry structures located in Egypt. As of November 2008, sources cite either 118 or 138 as the number of identified Egyptian pyramids.[1][2] Most were built as tombs for the country’s pharaohs and their consorts during the Old and Middle Kingdom periods.[3][4][5]

The earliest known Egyptian pyramids are found at Saqqara, northwest of Memphis, although at least one step-pyramid-like structure has been found at Saqqara, dating to the 1st Dynasty: Mastaba 3808, which has been attributed to the reign of Pharaoh Anedjib, with inscriptions, and other archaeological remains of the period, suggesting there may have been others.[6] The otherwise earliest among these is the Pyramid of Djoser built c. 2630–2610 BC during the Third Dynasty.[7] This pyramid and its surrounding complex are generally considered to be the world’s oldest monumental structures constructed of dressed masonry.[8]