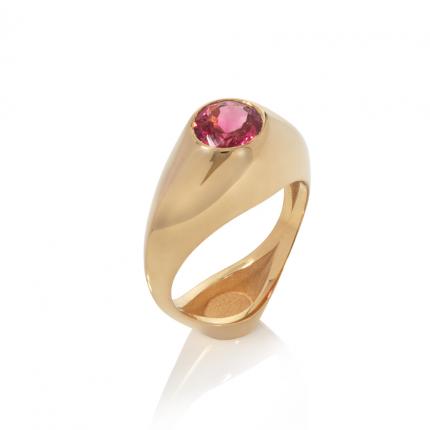 The Vessel ring is designed to accentuate this fabulous rare natural Burmese pink spinel. This is an organic freestanding form that has it’s own natural elegance and makes a wonderful receptacle for this stunning gemstone.

Add to Wishlist
SKU: VSLR-2 Categories: Gold rings, One of a Kind
How to measure ring size

The Vessel ring is designed to accentuate this fabulous rare natural Burmese pink spinel. This is an organic freestanding form that has it’s own natural elegance and makes a wonderful receptacle for this stunning gemstone.

Spinel is the magnesium/aluminium member of the larger spinel group of minerals. It has the formula MgAl2O4 in the cubic crystal system. Its name comes from the Latin word “spinella”, which means spine in reference to its pointed crystals.

Spinel crystallizes in the isometric system; common crystal forms are octahedra, usually twinned. It has an imperfect octahedral cleavage and a conchoidal fracture. Its hardness is 8, its specific gravity is 3.5–4.1, and it is transparent to opaque with a vitreous to dull luster. It may be colorless, but is usually various shades of pink, rose, red, blue, green, yellow, brown, black, or (uncommon) violet. There is a unique natural white spinel, now lost, that surfaced briefly in what is now Sri Lanka. Some spinels are among the most famous gemstones; among them are the Black Prince’s Ruby and the “Timur ruby” in the British Crown Jewels, and the “Côte de Bretagne”, formerly from the French Crown jewels. The Samarian Spinel is the largest known spinel in the world, weighing 500 carats (100 g).

The transparent red spinels were called spinel-rubies or balas rubies. In the past, before the arrival of modern science, spinels and rubies were equally known as rubies. After the 18th century the word ruby was only used for the red gem variety of the mineral corundum and the word spinel came to be used. “Balas” is derived from Balascia, the ancient name for Badakhshan, a region in central Asia situated in the upper valley of the Panj River, one of the principal tributaries of the Oxus River. Mines in the Gorno Badakhshan region of Tajikistan constituted for centuries the main source for red and pink spinels. Taken from Wikipedia

Spinel occurs in a wide variety of colors, from bright reds through to deep blues, it is a spectacular gemstone. For many years gem traders confused spinel with ruby and sapphire.

Spinel: ‘The Great Impostor’ No More

Long considered a kind of poor man’s ruby, the gemstone has come into its own. Quote from a terrific article in the New York Times on 10 Feb 2020