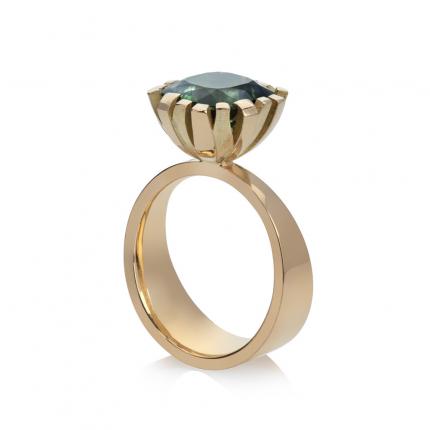 Add to Wishlist
SKU: FLR-1 Categories: Engagement - Wedding, Gold rings, One of a Kind
How to measure ring size

The Flax ring – the sides of the setting could be inspired by Rousseau’s jungle paintings, the flat polished ends making for a very pretty surround for the stunning glowing green tourmaline.

The band is elegantly tapered, making for a very comfortable ring, with a beautiful unique setting.

Henri Julien Félix Rousseau ( 21 May 1844 – 2 September 1910)[1] was a French post-impressionist painter in the Naïve or Primitive manner.[2][3] He was also known as Le Douanier (the customs officer), a humorous description of his occupation as a toll and tax collector.[1] He started painting seriously in his early forties; by age 49, he retired from his job to work on his art full-time.[4]

Ridiculed during his lifetime by critics, he came to be recognized as a self-taught genius whose works are of high artistic quality.[5][6] Rousseau’s work exerted an extensive influence on several generations of avant-garde artists